MoCFI: A Framework to Mitigate Control-Flow Attacks on Smartphones

MoCFI is the first general control-flow integrity (CFI) framework for smartphone platforms. It protects against runtime and control-flow attacks (e.g. code injection or ROP) by enforcing that jumps go to an expected location. The implementation is on iOS though the overall technique should be applicable to Android (which also uses ARM). Note: requires jail-breaking to set an environment variable, install a shared library, and allow the library to rewrite app code during load-time.

MoCFI consists of the following steps:

Runtime and control-ﬂow attacks (such as code injection or return-oriented programming) constitute one of the most severe threats to software programs. These attacks are prevalent and have been recently applied to smartphone applications as well, of which hundreds of thousands are downloaded by users every day. While a framework for control-ﬂow integrity (CFI) enforcement, an approach to prohibit this kind of attacks, exists for the Intel x86 platform, there is no such a solution for smartphones.

In this paper, we present a novel framework, MoCFI (Mobile CFI), that provides a general countermeasure against control-ﬂow attacks on smartphone platforms by enforcing CFI. We show that CFI on typical smartphone platforms powered by an ARM processor is technically involved due to architectural differences between ARM and Intel x86, as well as the speciﬁcs of smartphone OSes. Our framework performs CFI on-the-ﬂy during runtime without requiring the application’s source code. For our reference implementation we chose Apple’s iOS, because it has been an attractive target for control-ﬂow attacks. Nevertheless, our framework is also applicable to other ARM-based devices such as Google’s Android. Our performance evaluation demonstrates that MoCFI is efﬁcient and does not induce notable overhead when applied to popular iOS applications.

The following are relevant diagrams from the paper. Several diagrams and performance graphs have been omitted, see the paper for details. 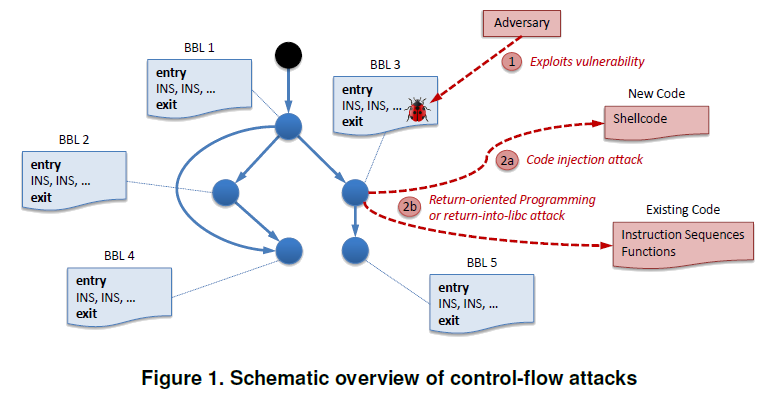 The Trampolines Inserted into Apps To Redirect Control Flow