Measuring the Cost of Cybercrime

The authors attempt to calculate the approximate cost to individuals and society of several types of cybercrime.

Direct losses: losses, damage, or other suffering felt by the victim as a consequence of a cybercrime.

Indirect losses: the losses and opportunity costs imposed on society by the fact that a certain cybercrime is carried out, no matter whether successful or not and independent of a specific instance of that cybercrime. Indirect costs generally cannot be attributed to individual victims.

Conclusion: We should spend less in anticipation of computer crime (on antivirus, firewalls etc.) and an awful lot more on catching and punishing the perpetrators.

In this paper we present what we believe to be the first systematic study of the costs of cybercrime. It was prepared in response to a request from the UK Ministry of Defence following scepticism that previous studies had hyped the problem. For each of the main categories of cybercrime we set out what is and is not known of the direct costs, indirect costs and defence costs -- both to the UK and to the world as a whole. We distinguish carefully between traditional crimes that are now `cyber' because they are conducted online (such as tax and welfare fraud); transitional crimes whose modus operandi has changed substantially as a result of the move online (such as credit card fraud); new crimes that owe their existence to the Internet; and what we might call platform crimes such as the provision of botnets which facilitate other crimes rather than being used to extract money from victims directly. As far as direct costs are concerned, we find that traditional offences such as tax and welfare fraud cost the typical citizen in the low hundreds of pounds/Euros/dollars a year; transitional frauds cost a few pounds/Euros/dollars; while the new computer crimes cost in the tens of pence/cents. However, the indirect costs and defence costs are much higher for transitional and new crimes. For the former they may be roughly comparable to what the criminals earn, while for the latter they may be an order of magnitude more. As a striking example, the botnet behind a third of the spam sent in 2010 earned its owners around US$2.7m, while worldwide expenditures on spam prevention probably exceeded a billion dollars. We are extremely inefficient at fighting cybercrime; or to put it another way, cyber-crooks are like terrorists or metal thieves in that their activities impose disproportionate costs on society. Some of the reasons for this are well-known: cybercrimes are global and have strong externalities, while traditional crimes such as burglary and car theft are local, and the associated equilibria have emerged after many years of optimisation. As for the more direct question of what should be done, our figures suggest that we should spend less in anticipation of cybercrime (on antivirus, firewalls, etc.) and more in response -- that is, on the prosaic business of hunting down cyber-criminals and throwing them in jail.

I thought the paper presented an interesting and thoughtful way to break down the types of cybercrime costs (direct, indirect, etc).

The authors also did a great job surveying and aggregating different types of cyber crimes and their associated costs.

Many of the costs are heavily estimations and may easily be off up to an order of magnitude, which the authors readily admit. This is understandable, as it's difficult to get precise numbers.

There was limited novelty of technique / methodology, they primarily reference and aggregate existing work. To be fair, the latter is the intention of the paper.

Choose to estimate global figures, as sometimes there is only global or only UK data. They scale UK-only data based on that it's roughly 5% of world GDP.

Criminal revenue: the monetary equivalent of the gross receipts from a crime, excluding any `lawful' business expenses of the criminal. (e.g. paying for hosting services)

Defence costs, like indirect losses, are largely independent of individual victims. Often it is even difficult to allocate them to individual types of cybercrime. Defences can target the actual crimes or their supporting infrastructure, and the costs can be incurred in anticipation of or reaction to crimes, the latter being to deter copycats.

The misallocation of resources associated with cybercrime results mostly from economic and political factors rather than from behavioural ones. Globalisation means that for much online crime, the perpetrators and victims are in different jurisdictions. This reduces both the motivation and the opportunity for police action.

While these activities are often referred to directly as cybercrime, they enable many different crimes. They estimate the infrastructure's cost separately to avoid double counting.

Botnets - Herley and Florencio estimated an upper bound to botnet herders' income of 50c per machien per annum.

It is very difficult to estimate the size of botnets. Previous approaches have relied on counting number of unique IPs associated with botnet activity. However, dynamic IP address allocation can cause the same machine to show up as many IP addresses, causing the number of believed bots to be off by an order of magnitude.

Pay-per-install - malware authors pay a PPI operator to install their malware on X PCs in a geographic area for a fee.

Traditional acquisitive crimes, such as burglary and car theft, tend to have two properties. The first is that the impact on the victim is greater in financial terms than either the costs borne in anticipation of crime, or the response costs afterwards such as the police and the prisons.

Drilling down further into the victim costs, we find that for nonviolent crimes the value of the property stolen or damaged is much greater than the cost of lost output, victim services or emotional impact.

The criminal justice system recognises the quite disproportionate social costs of robbery as opposed to burglary. While robbers get longer sentences than burglars do, cyber-crooks get shorter ones. This is probably because cyber-crimes, being impersonal, evoke less resentment and vindictiveness. Indeed, the crooks are simply being rational: while terrorists try to be annoying as possible, fraudsters are quite the opposite and try to minimise the probability that they will be the targets of effective enforcement action.

Why does cyber-crime carry such high indirect and defence costs? Many of the reasons have been explored in the security-economics literature: there are externalities, asymmetric information, and agency effects galore. Globalisation undermines the incentives facing local police forces, while banks, merchants and service providers engage in liability shell games. We are also starting to understand the behavioural aspects: terrorist crimes are hyper-salient because the perpetrators go out of their way to be as annoying as possible, while most online crooks go out of their way to be invisible.

The following are relevant diagrams from the paper. Several diagrams and performance graphs have been omitted, see the paper for details. 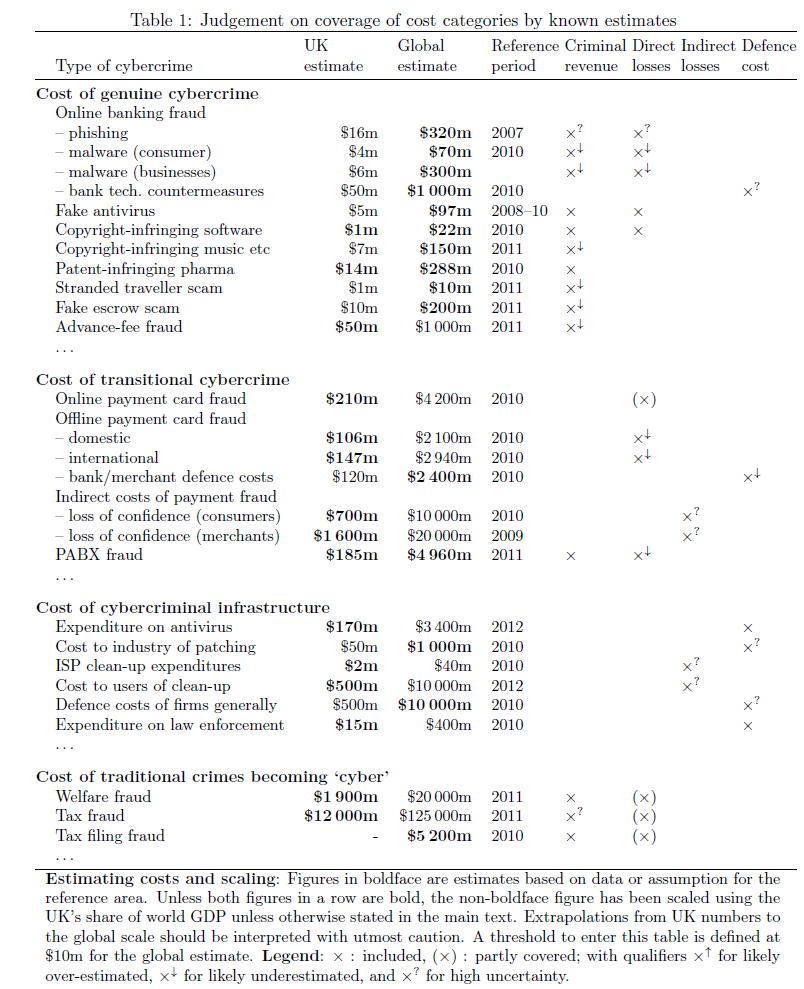